" ''Brookies are my favorite. They're the only trout native to Virginia and they live in nice places. John catches a memory, a recollection of the fragrant smells of mountain greenery, a chorus of birdsongs mingling with the symphony of a rushing stream- things that once experienced, hook you as surely as a fly hooks a brookie.'' " 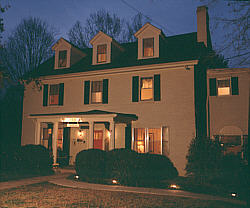 From the Journal of An Old Trout Guide - Spring 2013

I have had the honor of taking of taking many, many people flyfishing over the years and the education process cuts both ways. They depend on me to introduce them to a brand new pursuit from the starting gate many times. Others may have varying degrees of experience, it makes no difference. We all learn from each other I will always believe. One of my favorite fishermen over over the years has been retired U.S.  Virginia Senator John Warner who was once married to Elizabeth Taylor. John is an experienced fisherman whom I have had a lot of fun with on several occasions.

One day he had to leave early from fishing for a political rally just up the road at a Harley Davidson motorcycle owners rally in Staunton. He changed his fishing duds for more appropriate black casual shirt, pants and hat for the event. I asked him if he had to prepare a speech and he shoots back, ''hell no John.'' ''My 1st day in the U.S. Senate in 1978 I was getting a little nervous because I was about to make my first big speech.''  An old longstanding Senator took me aside and gruffly told me, ''Warner, you don't look so good, what is your problem? '' John admitted as much ,worried that wouldn't get all the things he wanted in the speech. The crusty old Senator shot back, ''Warner, you are now a GD U.S. Senator, now get your ass up there, you'll think of something.''

I always think of this when we  are seeing fish rise and not coming up with right imitation on what they are feeding on. People depend on me as a guide.  Sometimes I have to reach deeper, quit fishing and take a high spot verlooking a pool to and figure the right ''bug.'' Observation is a big key to success in taking fish at times like this, it may be a size  #26 midge,#22 BWO or a #20 ant. Think of something, you have step back from the stream to see them sometimes. John